September was the month for protesting the cause of catastrophic effects connected with global warming and climate change.  Events took on a global scale with Sweden’s teen, Greta Thunberg, showing up in New York after a sailing voyage across the Atlantic Ocean and gave an impassioned speech to the UN Climate Summit. 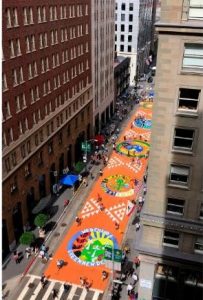 Several planned monumental events happened between September 20 – 27 in San Francisco.  There was the Global Climate Strike against the fossil fuel industry for its part in causing climate warming and its far reaching atmospheric and devastating environmental effects.  Events started on Sept. 20 with the Global Youth Climate Strike followed by a Strike for Climate Justice on Sept. 25.  Murals appeared on Montgomery Street in San Francisco’s financial district.  On Sept. 27, the Strike Against Chevron in San Ramon protesting Chevron’s careless apathy about climate change while profiting at the expense of young people’s future.  There were more actions in the Bay Area including the demonstration and traffic-disrupting swarm that occurred in SF’s Union Square on Sept. 23.

There was the UN Youth Climate Summit on Sept. 21 at the United Nations Headquarters in New York.  Young people from all walks of life, 18 to 29 years of age of came together to discuss their ideas and collaborate with other youth and adult climate change leaders.

The annual UN Climate Action Summit, on September 23 and also at the UN Headquaeters in New York City convened the countries that make up the Conference of Partners (COP) for a summit meeting before the main event, the UN Climate Change Conference (COP 25).  They honed in on the Paris Agreement commitments by the various partners and continued the process of setting goals for 2020 and beyond.  COP 25 will take place in Santiago, Chile in December. Climate change keeps happening before our eyes.  Hurricane Dorian is yet another unprecedented example of serious atmospheric changes going on around us.  It’s the type of thing scientists can’t accurately predict or warn us about.  What they keep saying is that unprecedented phenomena are to be expected.

A massive top-level hurricane moved with almost calculated slowness and stalled its forward movement over a beloved island.  Then it spins for about two days before slowly moving northward, wreaking havoc to the Carolinas and northward into Canada.  One might even call Dorian a “Category 6” hurricane – an off-the-scale storm in terms of size, amount of water dumped in a short time, its slow-moving nature, and top wind speed.

The two islands, Grand Bahama and especially Abaco Island, are totally devastated.  An over-zealous politician iterated something about building back “better than ever”, while most survivors can’t fathom risking another experience like the one they barely managed to come out of alive.  No one was ready for such a storm!!  Especially our politicians!!??  The thought of rebuilding on islands such as the Bahamas and many others, with rising sea levels and ever more intense storms, makes no economic or common sense.

The House of Representatives passed two bills to protect our coastlines (Atlantic and Pacific), the eastern coast of Florida and a third bill is forthcoming to protect ANWR (Arctic National Wildlife Refuge).

The bill to protect the Atlantic and Pacific coastlines called the Coastal and Marine Economics Protection Act, was sponsored by Rep. Joe Cunningham (D-SC) and will place a moratorium on offshore drilling.  The measure passed 238 – 189.  It will also curtail the oil and gas leasing powers of the Bureau of Ocean Energy Management.

A third bill sponsored by Rep. Jared Huffman (D-CA), that passed in the House 225-193, is designed to reinstate a decades-long ban on oil and gas drilling in ANWR.

All three bills have slim chances of passing the Senate and are stringently opposed by corporate organizations.  Such legislation also faces Trump’s veto of anything that threatens the fossil fuel energy companies.

The corporate mantra to “leave no stranded assets”, corporate language for the shareholders of the intent to get every drop of oil in the earth, is still the lockstep, marching drum beat for oil companies.

Here are some considerations about how important Water (capital ‘W’) is for this state.  First of all, it’s a massive state agricultural issue and a national food issue.  California supplies two-thirds of the nation’s fruits and vegetables.  Also, the 40 million people of the state depend on it for life and livelihoods.   During the six-year drought that ended two years ago, the legislature debated water storage, agriculture, salmon runs and the Delta ecosystems ad nauseum.

SB-1, California Environmental, Public Health and Workers Defense Act of 2019, was to be California’s protection from the Trump Administration’s attempt to control, among other things, the shifting of fresh water from Northern California to Southern California.  Senate President Pro Tem Toni Atkins presented SB 1 as a solution.  It would allow California to maintain control over such things as the Central Valley Project with its federally funded dams, pumps, canals and aqueduct.  SB 1 was created to ensure California’s sovereignty over our water, air, and species remained in the state, and did not become subject to federal government control.  It was also written to give discretion to state agencies to adopt rules and regulations that are more stringent than those of the federal government.

It is not clear if a State law can supersede a federal law and one thing for sure is that the bill would have caused much conflict, for good or bad.  It took Gov. Newsom only a few hours to get around to vetoing SB 1, which was very much what Metropolitan Water District and Westland Water District and the agricultural organization, Western Growers, wanted.

Environmentalists and other proponents of the bill see Trump as a danger to such federal protections as the Endangered Species Act and drinking water quality.  They see the bill as a way to maintain a way of life that does due diligence to the environment and could work as part of a Green New Deal.  It is possible to take this back to the drawing board, give it more thought, and come up with a better plan. 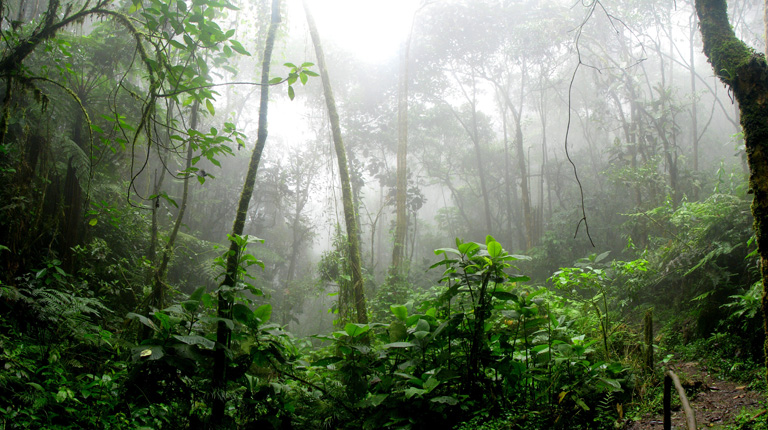 The California Air Resources Board (CARB) voted Sept. 19 in favor of the California Tropical Forest Standard.  It’s a program to support projects in places like the Amazon rainforest.  It’s designed to discourage deforestation and forest degradation, and to decrease atmospheric carbon dioxide.   The California Tropical Forest Standard is also designed to fit with California’s Cap & Trade program in the form of credits that can be bought by California corporations in lieu of decreasing their CO2 for any given year.  Carbon credits are part of the Cap & Trade program that gives companies environmental options if they can’t or won’t decrease their pollution for any given year.

The idea of using carbon offsets to save tropical rainforests and thereby saving the world from climate change is controversial.  To let corporations get away with polluting by paying for carbon credits is preposterous by many standards.  Concern for indigenous people’s rights and treating Nature as a commodity also come into play around this issue.   In the past there has been little enforcement around corporate interests in other carbon credit plans.

The final draft of the Proposed Endorsement of California Tropical Forest Standard was presented and finally came to a vote after long legislative process.  There are environmental organizations in favor of the program and also those that oppose the whole idea of carbon credits and how the funds are spent on the ground.  The UN programs on reducing emissions through prevention of deforestation and degradation (REDD & REDD+) have proved to be less than successful and even corruptive at times.

The Trump Administration’s EPA under Andrew Wheeler is getting tough and pulling political tricks to bring California under the President’s plan for the country.  The biggest bombshells, so far, are: The administration wants to end California’s ability to set its own standards, which was made official by a letter from Administrator Andrew Wheeler to California Air Resources Board chair, Mary Nichols.  Wheeler’s plan is to move forward with one national standard.  It’s a plan that standardizes auto emissions for all states and, in general, ignores GHGs from cars and trucks.

This comes on the heels of Gov. Newsom’s veto of SB1, which would have preserved federal standards for air emissions that were in effect before Trump took office.   SB1 was to be “insurance” against Trump’s threats to corral California into the lesser tail-pipe emissions standards, as well as endangered species and water standards.  The question is, “Has Gov. Newsom played into Trump’s hands?” by vetoing the bill.  There’s certainly more to follow on this story. 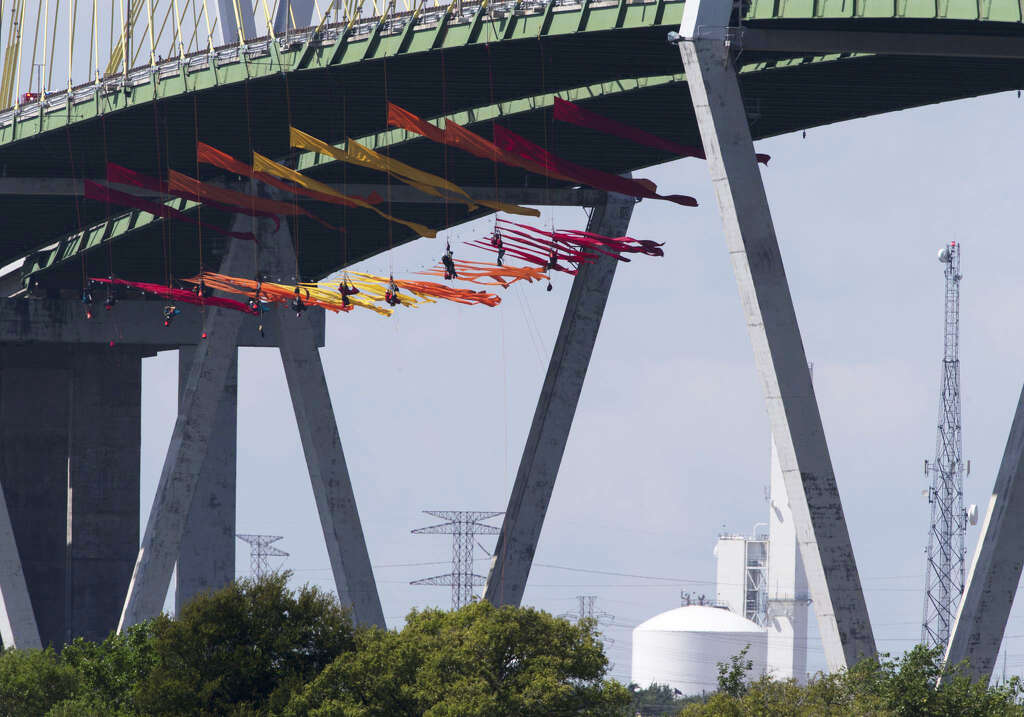 Twenty-two Greenpeace activists rappelled down the side of the Fred Hartman Bridge and managed to close a portion of the Houston Ship Channel.   It was purposely done on the evening of the Democratic Debate on September 12, to bring attention to the use of fossil fuels and its role in climate change.