After 100 days of war in Ukraine, where we witness In horror scenes of destruction every day, this report will give you a very short, nutshell perspective of the environmental wonder that is the country of Ukraine.  Keep in mind that it is still being shelled and bombed as this is written.  So, this is an effort to bring together a few pieces (listed below) of Ukraine’s reality into a perspective you may not be aware of: 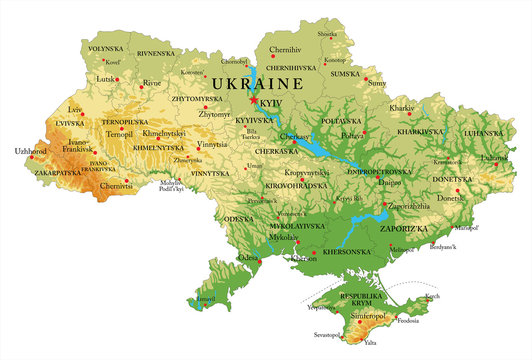 According to the Encyclopedia Britannica, Ukraine’s economy developed as part of the former Soviet Union’s overall economy.  Its output share became larger than other parts of the old Soviet Union in the 1980s (by about 20%), leading with agricultural and industrial goods. The nation is known for its rich dark soils and favorable climate making it a world leader in wheat, potatoes, sunflowers, and sugar beets. It’s also very prolific with other crops like barley, corn, oats, fruit orchards, and many types of garden crops. Livestock is also well developed with cattle and pigs raised throughout the country and dairies concentrated in certain areas.

Mineral resources are concentrated in the eastern region with iron, manganese ores along with rich deposits of bituminous and anthracite coal. The country’s energy sources consist of about 33% natural gas, 30% coal, nuclear 21% with renewables and imported power comprising the balance. Other mined resources include titanium, bauxite, nepheline, alunite, mercury and a large selection of other locally mined resources such as rock salt, ozokerite (a natural paraffin), phosphorites, and sulfur.

After the Soviet Union’s transition from state-owned collective farms to a land-privatization economy in the 1990s, farmers became independent land owners. 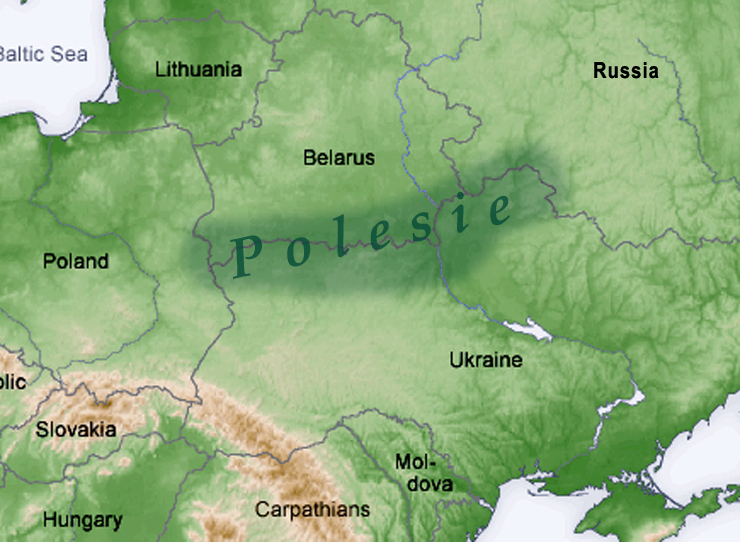 The Guardian recently reported on a huge forest-wetlands area, mostly in Belarus, defined by the Pripyat River that generally runs in an east-west direction.  This special area is called Polesia and straddles the border with Ukraine and extends into Russia on the east side and into Poland on the west.  Polesia is called “The Amazon of Europe” and is well known to European environmentalists and birders.  Its size is about 100 hectares, close to 44.5 million acres.  It’s home for about 1.5 million migratory birds and an assortment of animals.  There’s an organization called Birdlife Belarus (APB) with offices in Belarus that, until the war started, was leading the effort toward conserving biodiversity and general environmental protection.  Because of the conflict with Russia, Belarus authorities arrested many of its former employees, accused of destabilizing the political situation. Other NGO groups have experienced similar fates.  It leaves the biodiversity conservation effort with a measure of uncertainty. 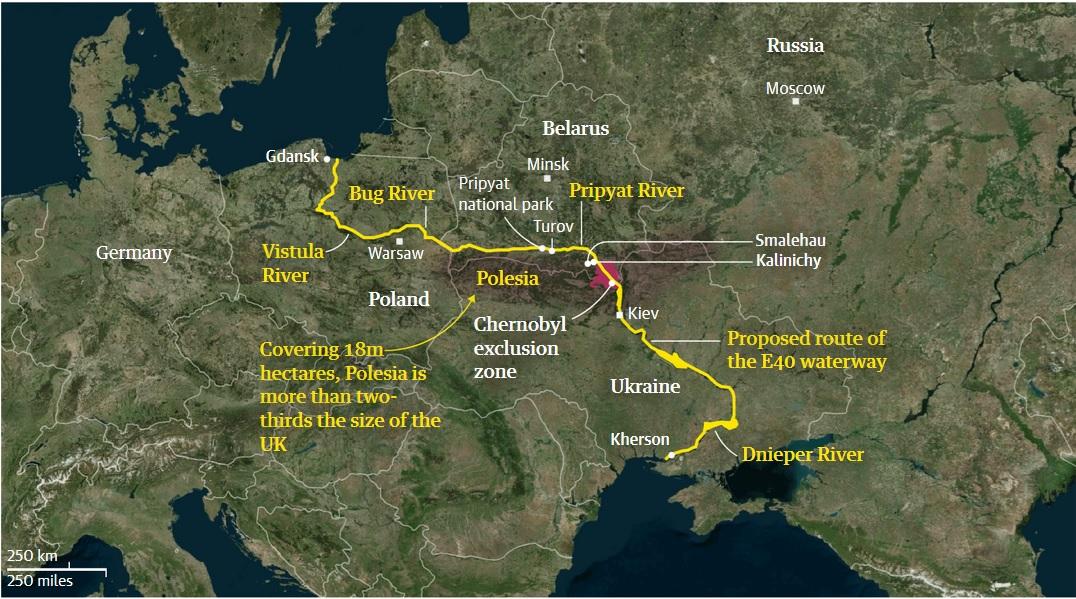 A controversial project had started before the Russian invasion that was called the E40 Water Way (the E denotes and inland water way).  The project was approved by the United Nations in 1996 and was a collaborative task between Poland, Belarus, and Ukraine.  It would connect the Baltic Sea from the port at Gdansk, Poland in the north with the city of Kherson, Ukraine on the Black Sea at its south end, a total of 1,240 miles.  It would also necessitate the connect of the Vistula and Bug Rivers in Poland with the Pripyat River in Belarus with the Dnieper River in Ukraine.  It would accomplish this through a system of canals.  The APB and other environmental organizations were fighting the project as something that had adverse impacts on the environment, especially in Polesia.  The problems with the E40 Water Way have to do with dredging channels that would also dredge up Chernobyl radiation residues.  The increased water traffic would also have an effect on the environment, especially on bird migrations.  The project was halted before the war with Russia began, but may become an issue again at some later date.

Chernobyl is located in northern Ukraine, almost in the middle of Polesia (the shaded area on the map). The nuclear accident that happened in 1986 in Chernobyl is considered the world’s worse such crisis, although it ranks along with Fukushima in scope.  Fukushima was triggered by an earthquake with a Tsunami that accounted for most of the surrounding damage and human deaths.  Chernobyl is adjacent to the Dnieper River and any disturbance in the area could send water contaminated with radioactive substance down stream.  Here are two very short DeutscheWelle videos on the subject of the E40 Water Way:

The War with Russia 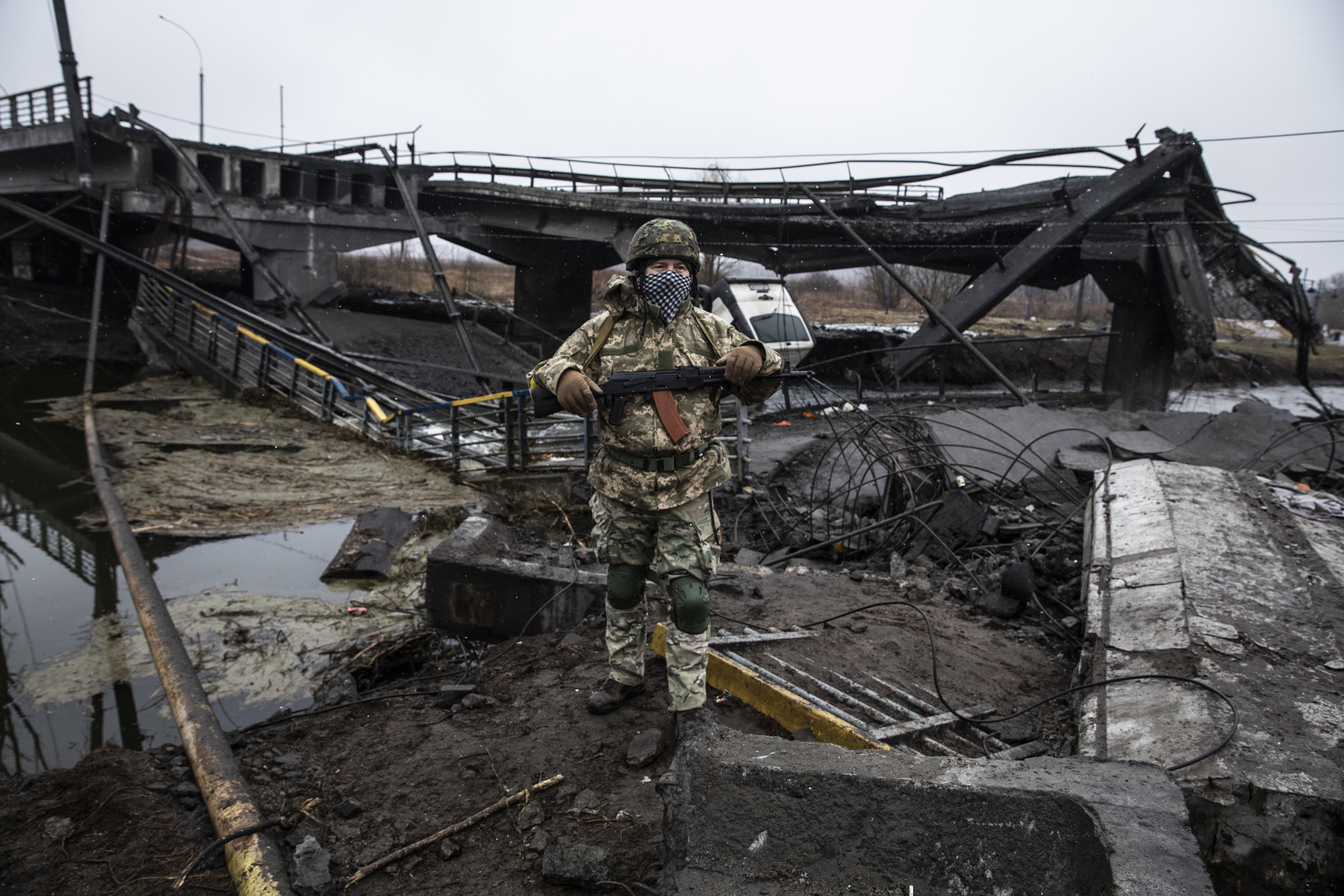 from the U.S.  It’s also leaving behind an environmental disaster on a scale that’s difficult to grasp.  As Biden’s Environmental Envoy John Kerry stated, the war would certainly detract and distract nations from the global effort toward mitigating climate change.

Any war is disastrous to the environment but in Ukraine’s case, with their developed economy, the targets were all too numerous. One could see on our TV screens the results of the sheer number of bombs, rockets, and other explosions that landed on targeted facilities of all kinds.  Among them were at least one nuclear power plant, fuel depots, a nitric acid storage tank and possibly many more such chemical storage units, buildings, residential apartments, bridges, infrastructure of all kinds, and countless other intentional or unintentional targets.  All this amounts to tons of pollutants dispersed into the air, water and land, spreading to pollute the country for years to come.

The Ukraine government has requested intelligence help to monitor the effects of the war so that, one day, it will be able to hold Russia accountable.  Per the Axios press agency, the United States government has stepped up with a coalition of twenty-one federal agencies working together to keep track of the environmental impacts of the war.  This special group is called the Interagency Working Group on Environmental Damage in Ukraine. It includes the EPA, NASA, NOAA, U.S. Forest Service, and the Department of Defense. There’s a small State Department unit called the Bureau of Oceans and International Environmental and Scientific Affairs spearheading the task.  This adds some intrigue and how altruistic this effort really is remains to be seen.

The inter-agency workgroup’s job will be essentially to help put together a “before and after” picture of the Ukraine natural resources and the damage caused by the war.  Their methods will include satellite monitoring, harvest tracking, various disruptions in the supply chain, the extent of different types of pollution, measuring risk of potential crises, including radioactivity from Chernobyl and other possible sites.

In closing, this only scratches the surface of the complex nature of Ukraine but it is hoped it will stir more curiosity to delve into this even further and watch what happens with the U.S. inventory of those areas destroyed by the war.