Lawsuit by SF and Oakland Against Oil Companies Thrown Out

A Northern California District federal court judge granted a request from the five oil companies (Chevron, BP, ConocoPhilips, ExxonMobil, and Royal Dutch Shell) after conducting a “tutorial” on climate science and deciding it’s a political issue to be determined by government branches and not one for the courts.  It’s a real blow to Bay Area cities, as well as to many other cities in the country.

However, the court did recognize the science is correct and the oil companies recognized this fact too.  The judge also stated that it’s a global problem, and deserves a solution on a broader scale than this court could render.  The judge’s opinion will make it more difficult for companies to go on denying the impact of fossil fuels.  San Francisco & Oakland lawyers are studying their next step, and other cities with pending litigation can make use of this opinion. 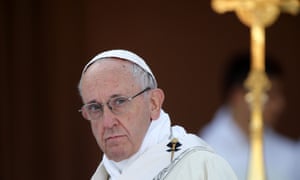 Since his 2015 Encyclical, Laudato Si, the Pope continues to champion the climate change cause, while stressing the dangers to the world, especially the impacts on poorer people.

On Saturday, June 9, he held a one-of-a-kind conference with oil executives to try to convince them of the importance of acting quickly toward leading the world away from fossil fuels.  The meeting took place at the Pontifical Academy of Sciences and included top executives from ExxonMobil, BP, Eni (an Italian energy company), Royal Dutch Shell and others.

He stressed the need to switch to renewable energy and stated at the end of the conference, “Civilization requires energy, but energy use must not destroy civilization.” 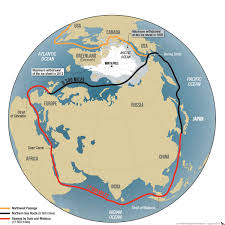 The newer tankers have ice breaking capabilities that are made for an age of thinning ice due to climate change.  Arctic travel is now possible, and newer tankers can use the Northern Sea Route, trimming 40% of the distance off their routes (see black route vs red route on map).  A tanker carrying liquefied natural gas (LNG) made it through this northern route in December, 2017, from Korea to France.  Until now tankers had to travel from Asia through the Suez Canal to reach Europe.

As routes open up in the Arctic oil companies will be saving more money but fragile ecosystems certainly will be endangered with more and more ships making their way over the top of the world.  The lack of resources for safe shipping in the Arctic will also increase the potential for catastrophes like oil spills.

As a supporter of the Paris Agreement and as a strong advocate of moving toward renewable energy, California has been slow to move away from oil production.  The report linked above delves into the implications of continuing to permit new oil wells, and seeks to explain ways to manage a phase out of oil production while guaranteeing a just transition for workers.

The report lays out a rational step-by-step approach in ceasing the issuance of new wells: start with a careful decrease in production (like 10% per year), while managing the impacts to California’s economy with new job starts in a better economy.

The researchers explain how California is well positioned to be able to make this happen.  Other countries like France, Ireland, Costa Rica, Belize, and New Zealand already have existing programs to phase out production. 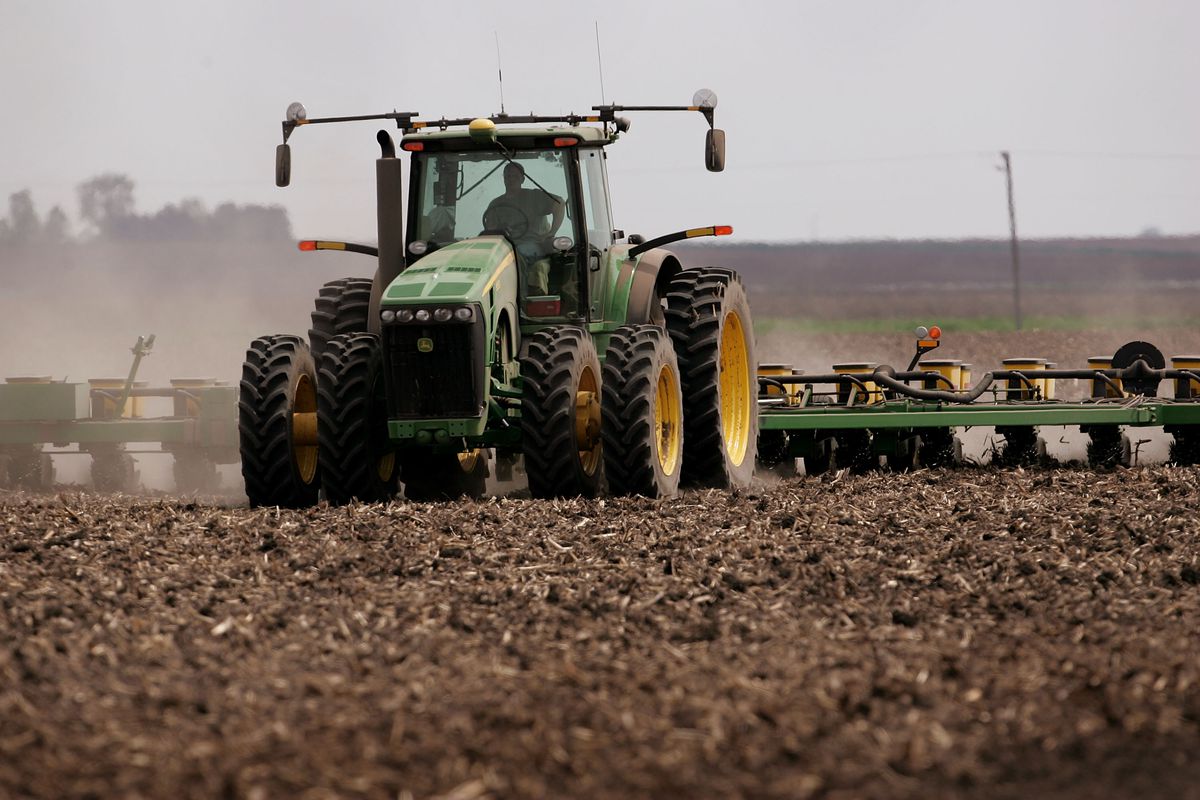 The Farm Bill, which is passed every five years, sets food policy, spends about $100 billion per year of taxpayer money and affects the lives of farmers across the country.  While it always generates a lot of controversy over subsidies, it has far-reaching environmental consequences on the land and to the farm workers.

The House and Senate are both closer to a Farm Bill with the House version much more dangerous to the Environment.  The latest from the House, called “HR 2, the Agriculture and Nutrition Act of 2018”, took $43 million from the pesticide industry to pass 213 – 211 in congress.

The Senate version passed on June 28 will keep SNAP in place and will do nothing to make necessary reforms in subsidies.  It promises to maintain the status quo of rewarding the bigger farmers while mostly ignoring the smaller farmers and almost guaranteeing a contentious battle in compromising with the House on a final bill.

DeWayne Johnson vs Monsanto is a lawsuit pitting a 46-year old groundskeeper at a unified school district in Benicia, California against the notorious corporate manufacturer of RoundUp, the herbicide formulation containing the active ingredient Glyphosate.  Mr. Johnson was diagnosed with non-Hodgkin Lymphoma (NHL) in 2014 and is not expected to live much longer.  The case will  put the world’s most extensively used herbicide in the limelight and may expose malfeasance in the EPA’s pesticide approval process.

More than 400 lawsuits are pending in U.S. District Court in San Francisco, as are many more cases elsewhere in the country numbering in the thousands against Monsanto regarding its popular but dangerous herbicide.  The plaintiffs allege exposure to RoundUp caused their or their spouses’  NHL  DeWayne Johnson vs Monsanto is the first of those cases.  The jury has been selected and the trial is slated to start on July 9.

Monsanto claims that Glyphosate is the most tested herbicide in the world and that NHL takes on the order of 20 years to show up in humans after exposure.  Mr. Johnson was exposed in 2012 and was diagnosed in 2014.  Monsanto is arguing that it’s not likely his exposure to RoundUp was the cause of his NHL.  Also, the company maintains that if used according to the instructions, which are rather complicated, the herbicide is perfectly safe.

Hazardous Substances and the EPA’s Functionality

A crop-genetics and crop-virology expert, Jonathan Latham, has managed to obtain through Freedom of Information Act a large stash (2-1/2 tons) of documents he calls the “Poison Papers”.  They come from government and chemical industry sources covering primarily in the 1960s to 1990s, are now stored at UCSF and are accessible from links in the above article.

The Poison Papers feature studies, tests, communiques, etc. connected with pesticide studies and how they were approved.  They can be used as proof that the EPA colluded with industries like Monsanto to produce fraudulent findings on such toxic substances as dioxins, atrazine and glyphosate.

This particular ruling by a District Judge in Brunswick, GA affects an Obama-era EPA policy that would protect smaller streams and wetlands that have been shown scientifically to have downstream impacts on larger tributaries and rivers.  The ruling affects 11 states in the South and Midwest.  A 2015 ruling in North Dakota affected 13 states, mostly western and mid-western states, in a similar Waters of the United States (WOTUS) injunction to curtail control of the federal Clean Water Act.

SB 100, The California Clean Energy Act of 2017, has moved to the Assembly Utilities and Energy Committee for the next step in the process to mark a giant step for the State to officially set an accelerated pathway toward clean energy.  It’s sponsored by Senator Kevin De Leon and will take SB 350 a step further.  SB 350 (The Global Warming Solution Act of 2016) set the GHG reduction rate at 40% by 2030.  SB 100 would set GHG reduction benchmarks of:

The President skipped all formal discussions on climate change at the G7 held in Charlevoix, Quebec, June 8 & 9.  The other six countries, Canada, France, Germany, Italy, Japan, and UK, reaffirmed their commitment to the Paris Agreement.

The U.S. issued its own insulting communique promising to “work with other countries to help them access and use fossil fuels more cleanly and efficiently.” The U.S., under Trump, continues on a stubborn isolationist path. 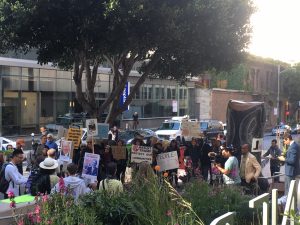 Scott Pruitt made an appearance to introduce and meet with his newly appointed administrator of the Region 9 EPA office in San Francisco.  His appointee, Mike Stoker, will oversee enforcement and projects in Region 9 (California, Arizona, Nevada, Hawaii, and other Pacific Islands).  Mr. Pruitt arrived around 7:00am on Friday, June 29, entering a rear entrance to keep his presence secret, and was met with the beginning of a larger protest that grew in size throughout the morning. 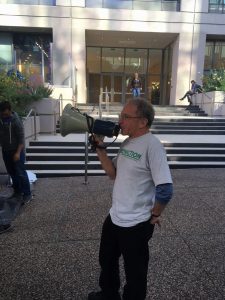 The protest was spearheaded by Bradley Angel of GreanAction and attended by activists from several other Bay Area organizations, including 350SF/BA, Sierra Club, Sunflower 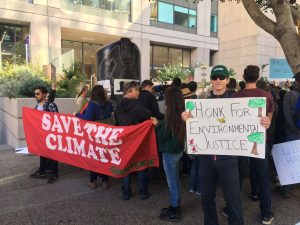 Alliance, and others.  Even EPA employees attended and expressed their appreciation for the protest.  Mr. Pruitt was seen by some through an upper floor window but remained hidden from view for the rest of the morning.

This was the monthly meeting of the SF Bay Restoration Authority’s Advisory Committee – composed of representatives from the various environmental organizations from the Bay Area that are charged with determining how to spend funds from Measure AA passed in 2016.  The first round of awarded grants is being put into place for projects that will restore wetlands, help mitigate sea level rise in San Francisco Bay, while maintaining community recreational value in the Bay.

Atlanta to Become a Leader in Renewable Energy

The city of Atlanta is well on the way toward meeting its goal of 100% clean energy by 2035 and creating jobs at the same time.  Working with the local power company, Georgia Power, and the Public Service Commission, the city is making arrangements to purchase renewable energy credits from out of state, to maximize the use of rooftop solar panels, and to create efficiency programs.

Alaska’s economic need to continue drilling makes it possible for oil companies to continue operations even though Alaska is warming at twice the rate as the rest of the country.  Oil companies now officially recognize their part in climate change but they can still function as if it doesn’t matter. 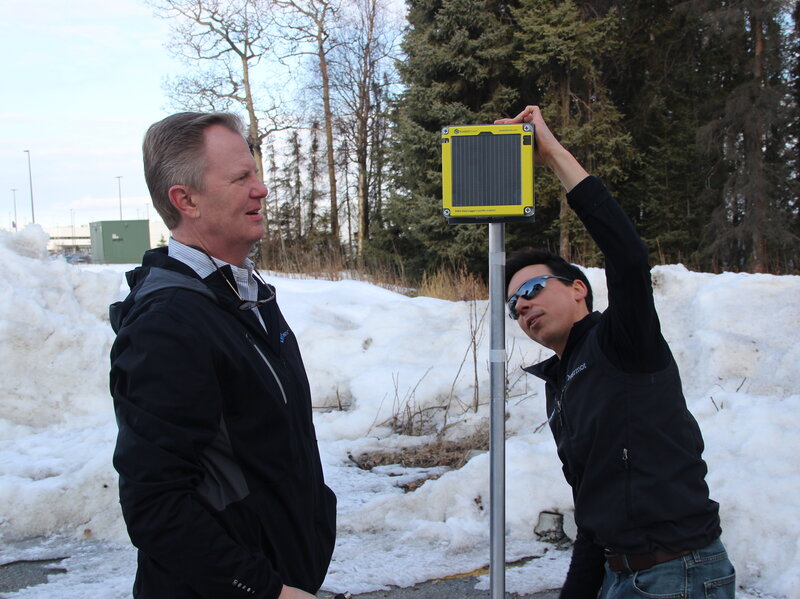 Companies have to build hundreds of miles of roads on ice in the winter to move equipment because Alaska’s state law only allows construction to begin when the tundra is frozen.  A new device that measures subsurface temperatures in the permafrost can now help them maximize the exploration period in a given year.

Another company is profiting from climate warming with a device that refrigerates the permafrost below buildings to maintain the stability of those built on the permafrost tundra.  Without such a service buildings would experience door sticking, cracks in sheet rock, and sloping floors.