The Great Student Strike of 2019 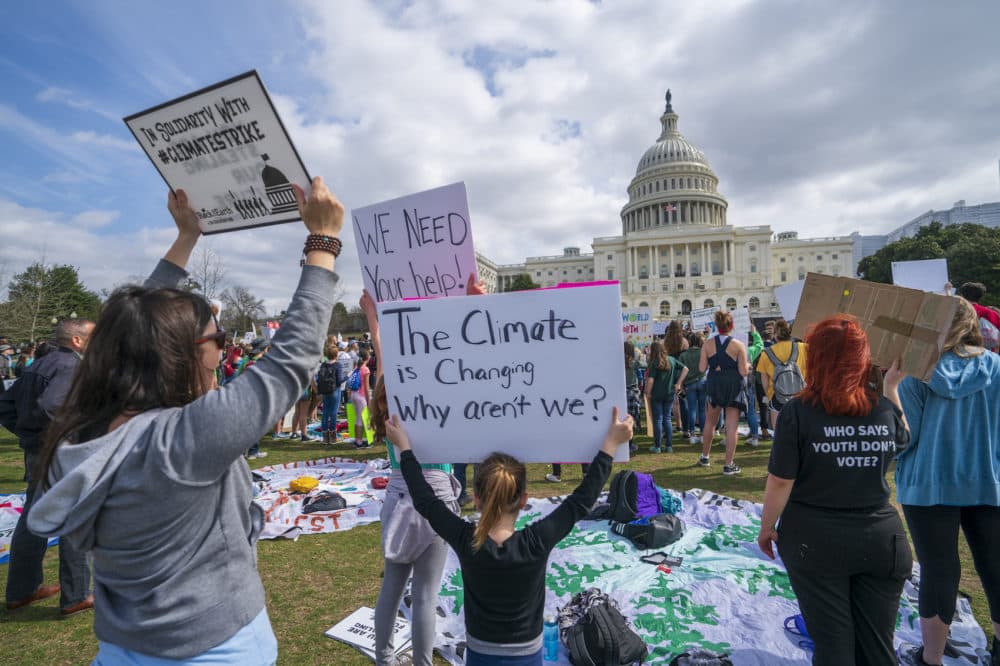 Thousands of young students took to the streets in 112 countries on March 15 to protest the lack of political action on climate change action. The student movement was inspired by Greta Thunberg, the 16-year-old from Sweden who carried out a lone protest in front of  parliament in 2018.  After speaking to the United Nations and other public venues she spurred a new movement,  mobilizing youths on a global basis.  Greta  has now been nominated for the Nobel Peace Prize. Stephen Seidel was the primary author of an Environmental Protection Agency report published in 1983 titled Can We Delay A Greenhouse Warming?,  He looks back in an interview on his publication.   Mr. Seidel worked at the time for the EPA Office of Policy Analysis in Washington, DC  and collaborated with his consultant, Dale Keyes to produce the report.

He was classified as “alarmist” by the Reagan Administration when he advocated a gradual shift away from fossil fuels as a better economic policy than one that does nothing.  He spelled out how we’re on course to reach a 2°C global rise in temperature by the middle of the 21st century.  This corresponds to today’s best guesses by climate scientists as they struggle to describe what that means to our climate and way of life. 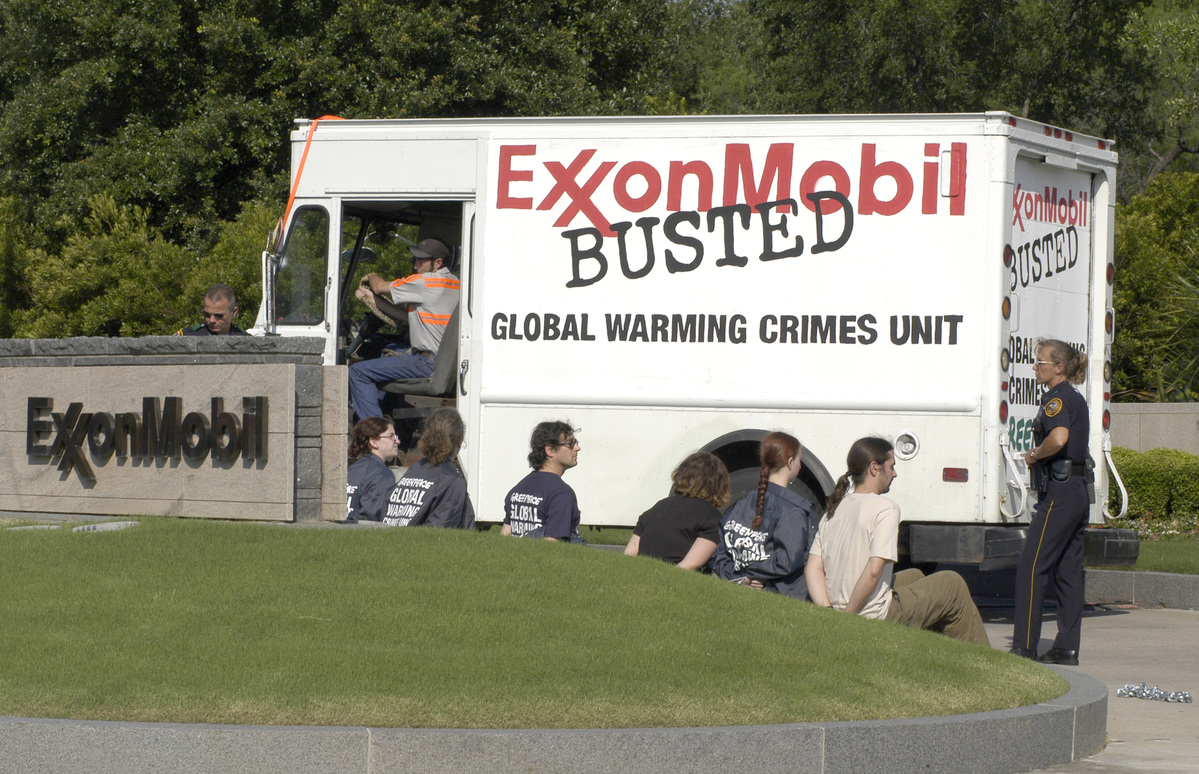 ExxonMobil may lose its lobbying access to the EU Parliament for not showing up for a hearing on March 21 on the company’s role in spreading false information about climate change.  The company has been in trouble since researchers uncovered Exxon’s (before merging with Mobil) internal files created in the 1970s.  The files document company studies regarding the effects of carbon dioxide and other greenhouse gases on climate change.  In 2015 when this news was coming to light, Greenpeace activists were arrested with their “ExxonMobil Busted” vehicle at the entrance of the ExxonMobil headquarters.

The company is being accused of spreading misinformation and sowing doubt about the role of fossil fuels on climate change.  The company spent over $30 million attacking climate change science by sponsoring a dubious brand of “scientists” similar to the way tobacco companies did in denying the link of cigarettes to cancer.

The door is now open on Glyphosate trials taking place in the Bay Area.  These are part of a series of over 9,000 pending cases against Monsanto which was purchased by the German company, Bayer, in 2016.  The courts will decide whether the herbicide, Roundup, is the cause of the plaintiffs’ Non-Hodgkin Lymphoma (NHL).

The first trial ended in August 2018 and was featured in this monthly Environmental Report in September.  DeWayne “Lee” Johnson, a Benicia school-district groundskeeper, who regularly used Roundup, was awarded $78 million for his incurrence of NHL. 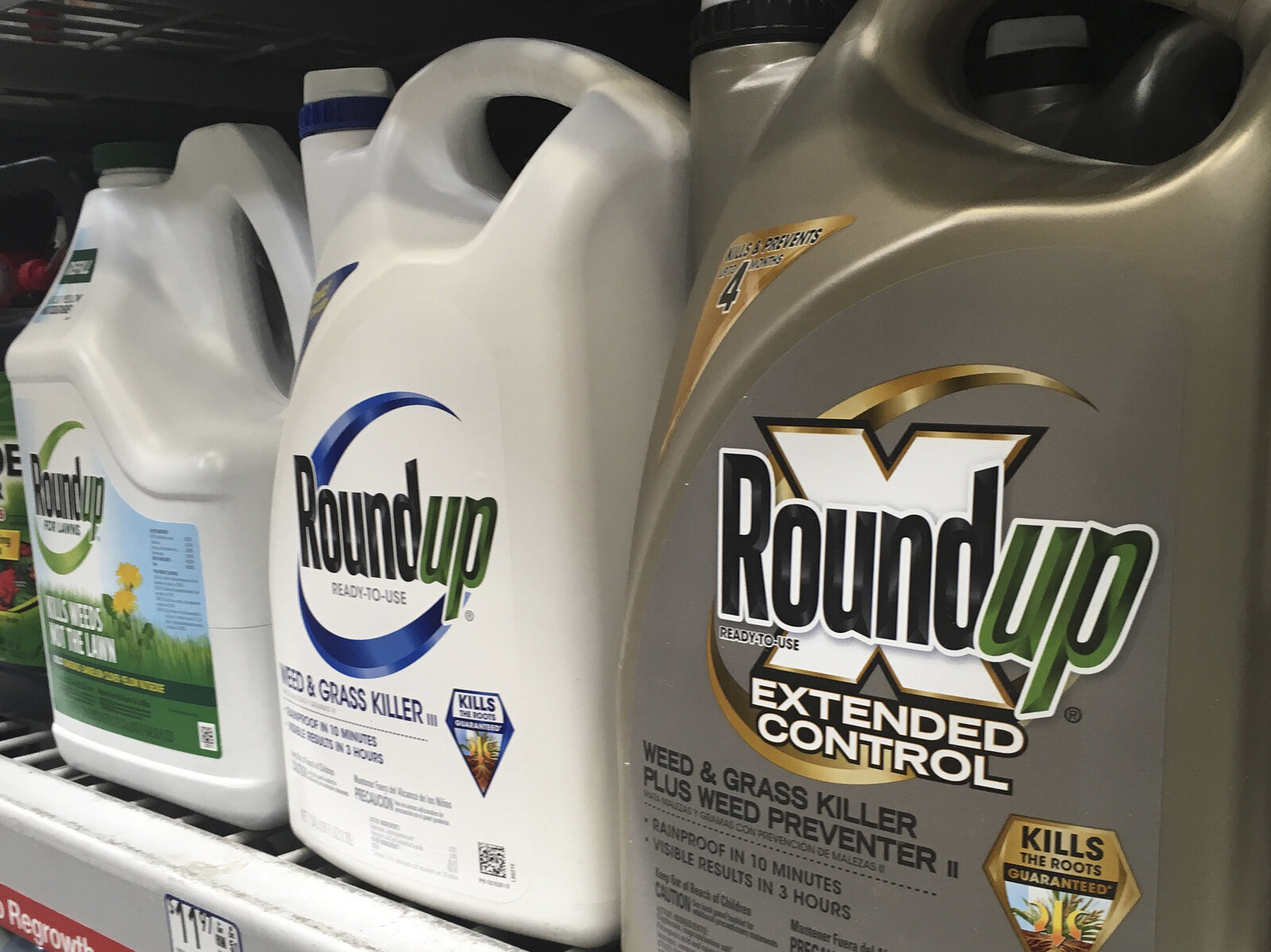 he Hardeman v. Monsanto trial was decided in San Francisco Federal Court and ended March 27 with a decision against Monsanto.   Edwin Hardeman used RoundUp on his property for over 20 years.  He was diagnosed with NHL in February, 2015.

The next trial, Pilliods v. Monsanto, is set for opening statements on March 28, in Alameda County Supreme Court in Oakland.  Alva and Alberta Pilliod used Monsanto’s Roundup for almost 26 years on their properties and each incurred a different type of NHL.  The case is slated to take about a month.  It’s the first case in the California RoundUp Judicial Council Coordination Proceedings (JCCP) which is an effort to decide over 150 cases that share the same question that are pending in different courts in California.

There are other lawsuits/trials in states like Montana and Missouri

Trump’s EPA is Planning to Use Antibiotics on Citrus Groves

The EPA is considering spraying 650,000 lbs. per year on citrus groves with the antibiotic streptomycin.  This was quietly proposed in December, 2018, as a cure for a condition called “citrus greening disease”.   Warnings from the U.S. Center for Disease Control,  World Health Organization and the United Nations to the effect that antibiotic resistance is a major health issue.  The Trump Administration seems to be ignoring warnings and is moving forward with plans for a spray treatment three times a year. 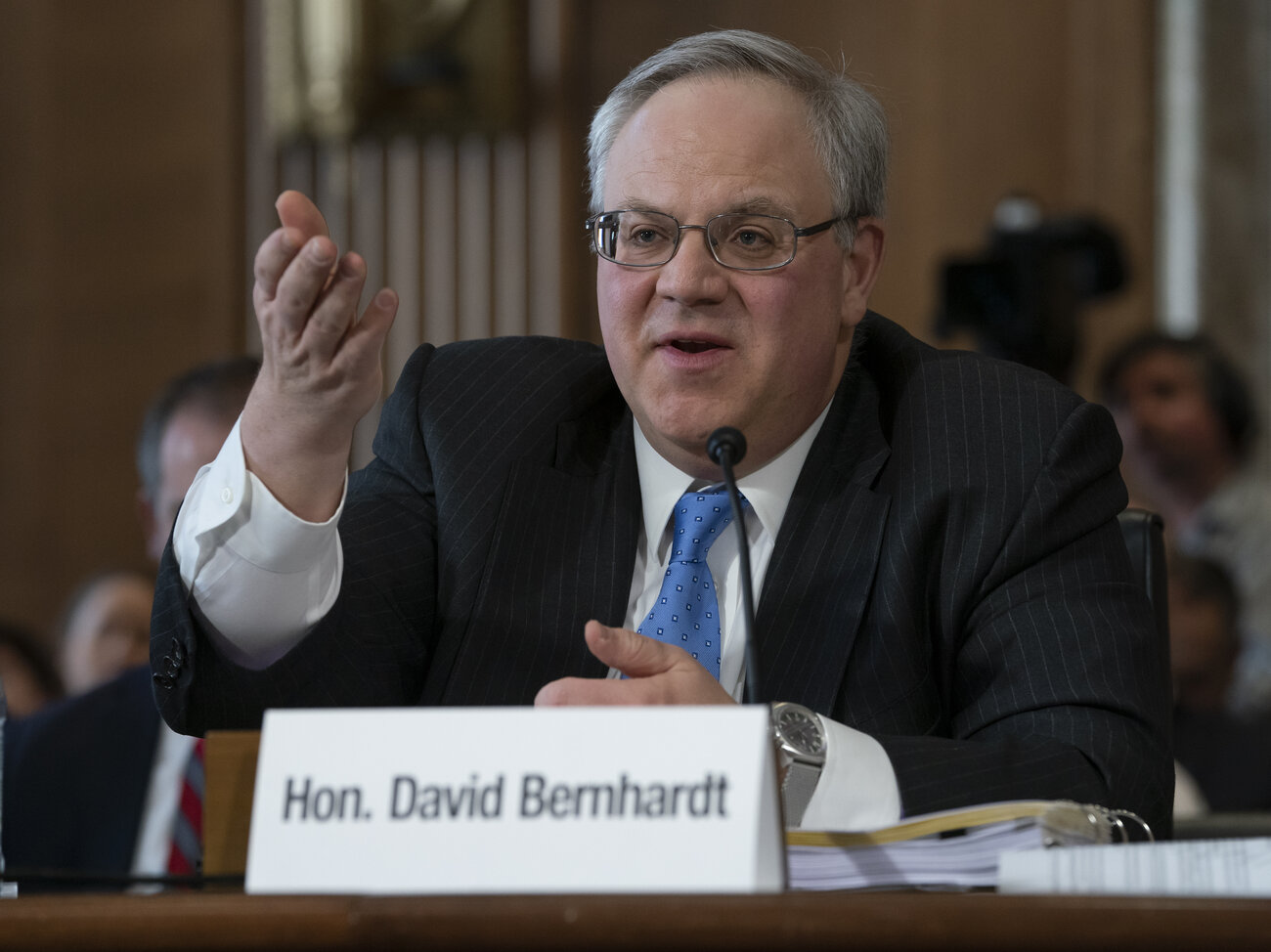 Trump’s nominee, David Bernhardt, served as Deputy Secretary of Interior to replace Ryan Zinke who stepped down under ethics charges.  Mr. Bernhardt, a former oil lobbyist, is just another “Swamp Thing” according to Greenpeace and Democratic leaders.  There’s a website by Outside Online devoted to tracking this nominee’s already long list of scandals.

Rep. Kathy Castor (D-FL), Chair of the Select Committee on the Climate Crisis introduced HR 9 along with Rep  Nancy Pelosi(D-CA) and other fellow Democrats.  The bill called “Climate Action Now Act” will have the U.S. rejoin the Paris Agreement and set the country on a path toward reducing carbon emissions.  It will direct the administration to set a plan in action to meet the Paris goals and at the same time create new green jobs.

The Green New Deal Off to Rough Start The GND is considered by many to be “unrealistic, unworkable and politically divisive”.   Republicans and Trump are branding it as “Socialism” in the worst sense of the word.  There is little attention paid to Franklin Rooselvelt’s  New Deal that was instrumental in making the U.S. “great again” by getting us on a better course during the depression and we continue to reap rewards from that today, e.g. Social Security, dams, parks, roads, etc.

In the past there has been very little concern about the effects of fossil fuel emissions by most congressional leaders but this year things are changing.  Even Republicans and CERAWeek attendees are, at least, talking about market-oriented solutions to climate change and even about reducing the nation’s carbon footprint!!

It should be known that the Energy Committee of the AFL-CIO came out against the GND in the form of a letter.  It claims the initiative is “far too short on specific solutions that speak to the jobs of our members and the critical sections of the economy” and “makes promises that are not achievable or realistic.”  This was not surprising, though, since the Energy Committee of the AFL-CIO doesn’t take easily to new ideas when it comes to jobs.

The part of the GND that Republicans hate so much is that it addresses economic inequity in our corporate world.  The profit/greed culture of American capitalism does not recognize the destructive nature of its economic polices on people and the need for social programs made necessary by its own narrow-mindedness.  An economic New Deal is overdue and so is corrective action on climate change, both promised by the GND.

Journey to Antarctica, The Blog, by Jeff Goodell 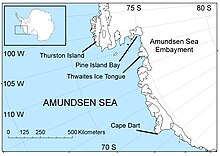 Jeff Goodell is aboard the research vessel Nathaniel B. Palmer ending a two month scientific study in Antarctica.  His dispatches in the form of a blog make for interesting reading in understanding Glaciology. The researchers are studying Thwaites glacier and the shape of the ocean floor beneath to understand glacial and ice sheet meting processes.   Thwaites glacier is considered an important ice unit because of its size and its vulnerability to collapsing.  It’s about the size of the state of Florida and is located on West Antarctica between and south of New Zealand and South America.  It contains enough ice to raise sea level about 10 feet. A new report on plastics entering the environment at the rate of eight million tons per year is getting a lot of attention.  The report takes a closer look at the toxic life cycle of plastics from its manufacturing process to its degradation and intrusive nature into human and environmental systems.  The report called Plastic & Health:  The Hidden Costs of a Plastic Planet offers convincing arguments for reducing the production of plastics. 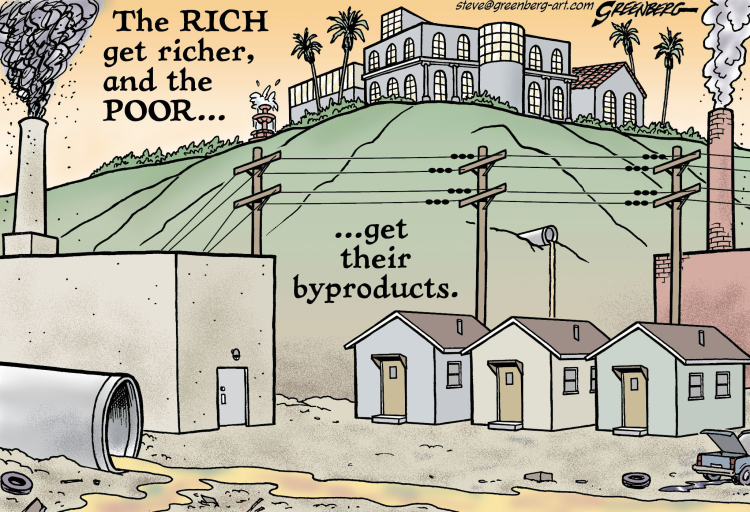