What is San Francisco’s  Plan for Climate Change? 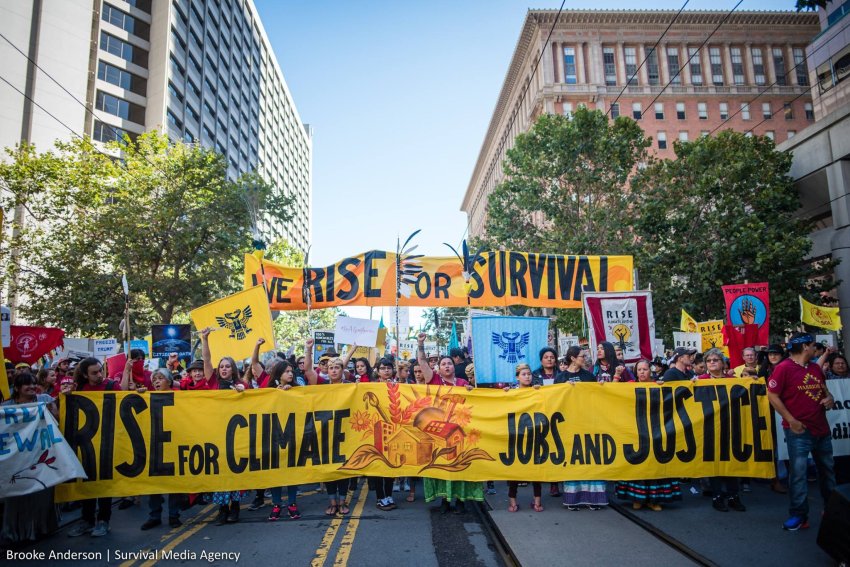 Many cities now have a Climate Action Plan (CAP) and San Francisco has the reputation of being in the forefront of this process.  CAPs can vary depending on the city. San Francisco’s strategy not only addresses the threats and impacts of climate change to its infrastructure and people, but is also meant to provide a path for the City to do its part in educating its citizens, and to guide its officials.  The City’s Department of the Environment and other technical working groups along with community planning and development units started working on this back in the 1990s and into the early 2000s.

In 2004, the City’s first CAP emerged under Gavin Newsom’s first term as Mayor.  It was very comprehensive, well thought out and became a worthy model for other cities.  The research on greenhouse gas emissions and emitters was impressive.  It targeted emission reductions by 20% of 1990 levels by 2012.  The year 1990 was the last year the concentration of Carbon Dioxide (CO2) was 350 ppm (parts per million) and that’s the agreed upon highest level of CO2 allowable to maintain a livable world as we know it today.  In 2021, the CO2 levels reached approximately 420 ppm.

Solid Waste was included because of the landfill problem and methane (CH4) production from organic waste, especially food.  In its 2004 CAP the City expanded recycling, added composting along with a food collection program, and placed a serious focus on construction & demolition (C&D) recycling.  The whole waste system was remade into a world-class collection process. Renewable energy became central to everything. It also focused on alternative fuel sources for its fleets and buses.  The new system was interwoven into the bureaucracy and had to work well with the City’s laws, codes, standards and policies. It also involved community input and educational outreach.

By 2010 it was obvious the plan was working. The report showed emissions were down by 14.5% from 1990 levels, which meant they were still on par for the goal of 20% by 2012. This was good news and the city became a leader on a broader stage. The reality of climate change was becoming more obvious with heat waves, fires, sea level rise, drought, and extreme weather events. The hurricanes Katrina (2005) and Sandy (2012), California’s “atmospheric river” (2012) with its powerful storms and flooding, along with other expensive national disasters, were taken to heart by municipal leaders. 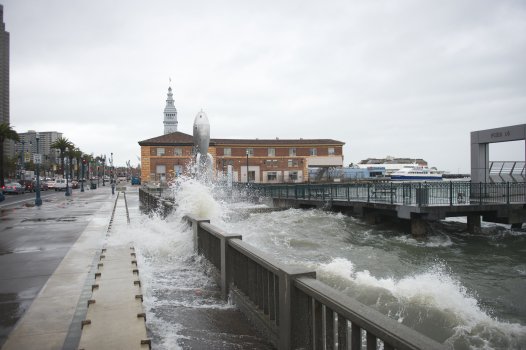 Waves break over the seawall at Pier 14 along the San Francisco Embarcadero during high tide on Feb. 14, 2011 (Photo: Dave Rauenbuehler, Port of San Francisco)

“Adaptation” became the international rallying call and adapting to the impacts of climate change became a worthy goal. “Resilience” was another word brought in to help define the efforts to meet the challenges.  The projected sea level rise in San Francisco is 11–19 inches by 2050 and 30–55 inches by 2100. Concern was given to demographic areas of those residents that could be at higher risk than others. Disparity between residents of different races, income levels, social isolation, old or young, and even anyone not having access to devices like air conditioning, became important issues.

In 2013, Ed Lee was elected Mayor and continued San Francisco’s work on the Climate Action Plan. The new update was called the 2013 San Francisco Climate Action Strategy. The Strategy continued with the building blocks set forth in the 2004 CAP and set the stage for future generations. New realities surfaced and the 2013 plan began to take shape.  Here are the percent changes by category from 1990 levels to those in 2019:

It added new features and emphasized:

This happened even while the City’s population increased by 22% and its gross domestic product (GDP) increased by 199%!

The new central goal will be to achieve 61% emission reductions by 2030 and reaching net-zero by 2040. Actually obtaining Net-Zero emissions involves relying on a system of credits or offsets to balance a small amount of remaining emissions. To help meet this goal the City has developed its own Community Choice Aggregation program called CleanPowerSF.  The new plan will also include (as stated in the Plan’s Executive Summary),

This set of ideas may be closely looked at as it will be judged in time as a San Francisco environmental justice challenge that could be an example for others to follow.

Social equity has become important in the City’s achievements.  It implies that jobs will be created in the process in a cleaner energy economy with a transition that brings BIPOC (Black, Indigenous and People of Color) and all disenfranchised people into the job market for making this happen – a more just economy.  It also implies working with companies to make the transition.

A bold concept arose in 2020, attacking the use of natural gas.  The City passed an ordinance to make all new buildings be required to use electricity instead of natural gas.  It will include all new homes, offices, and restaurants. In 2021, the City’s Supervisors also took up the more controversial idea of retrofitting all older buildings for electricity only.  It was received with even more controversy and the City may have trouble implementing such a plan.

A few things the City has going for it:  San Francisco has an asset with its Hetch Hetchy dam and reservoir.  The reservoir provides a few short years of water storage and the dam provides hydro-electric power (20%) that helps the city reach these emission goals.  One should also recognize the City’s residents are well informed and have had a hand in making these results happen.  They’re savvy and scrutinizing when it comes to making decisions for the people.  Having said all that, San Francisco’s success in achieving these goals has a lot to do with the team effort of its citizens and all levels of political resources available.

Until Biden became President, the federal government has been falling behind in making progress with climate change.  Hopefully, he can make subsidies and more funding available for helping cities and citizens mitigate, adapt to, and be resilient against the ravages of future climate emergencies.